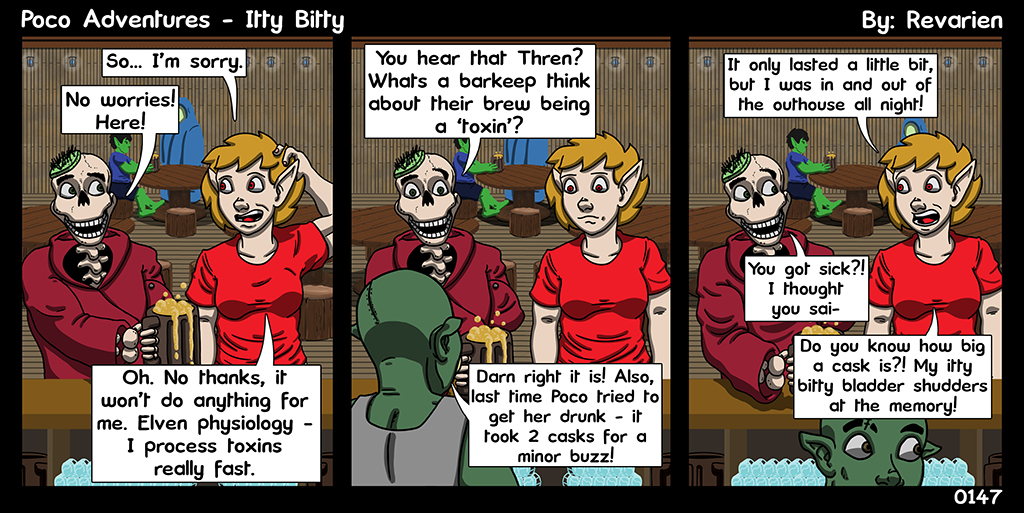 This contains a small, but important tidbit about Sun: not only can she not really get drunk (way back in Strip 27, Poco demanded they all try, while tipsy), but she just processes toxins super fast. Also, fun bit – if it were a magical drink, then it’d act normal to her… since she’s magical. So a magical booze is what she needs to get tipsy!

For the record – we’re talking pony-keg size. Even so – that’s still 62 PINTS of ale per small keg. I intially was going to use ‘keg’ but and then said “well I must be specific… so pony-keg” then I realized how odd that sounds in conversation and reverted back to ‘keg’ – but most people when they hear keg, they think of something drastically larger. So I went even BROADER and used cask… it’s more encompassing.

Sorry to nerd-out on writing complications, but minor word choice is something I agonize over from time to time.

Don’t fret about it. Knowing about the “minor” word choice is cool. And the fact that you know it matters is a sign of your craftmanship. In a 3 pannels with a punchline format, tempo, first impressions and clarity matters. The fact that you can cram in some character building and relationship building is frankly remarkable.
Kudos and keep it comming, if you please!