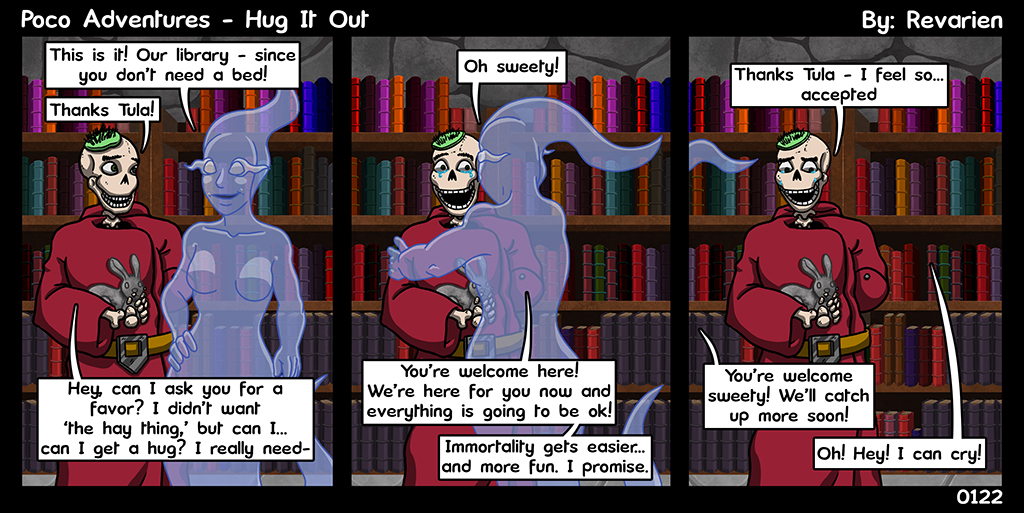 This is concluding the C Story of this chapter (since A and B collapsed into themselves) with Nigel and Tula – full access to the Outrunner Outpost library! 😀
Some of the folks over at Comic Tea Party discussed Poco Adventures on their weekly book club! I only hope to live up to their expectations, but some seemed to have a pretty solid handle on a few things that may happen… others sound like they’ll surprise them ;3

You are free to read and comment about the comic all week at your own pace, so stop on by whenever it suits your schedule! Remember, though, that while we allow constructive criticism, our focus is to have fun and appreciate the comic. Below you will find four questions to get you started on the discussion. However, a new question will be posted and pinned everyday (between 12:01AM and 6AM PST), so keep checking back for more! You have until February 3rd to tell us all your wonderful thoughts! With that established, let’s get going on the reading and the chatting!

:coffee: QUESTION :coffee:
1. What has been your favorite scene in the comic so far? What specifically did you like about it?

:coffee: QUESTION :coffee:
2. At the moment, who is your favorite character? What about that character earns them this favor?

:coffee: QUESTION :coffee:
3. Will Nigel remain on Poco’s side, or will he eventually turn evil because of the lich dagger? How will Nigel’s evil traits coming to light affect Poco’s belief in trusting people until they prove her wrong?

:coffee: QUESTION :coffee:
4. Will Sun’s status as an elvish princess earn her pursuers in the future? Do you believe Sun will continue to remain with Poco, or will duty eventually compel her to leave?
RebelVampireLast Tuesday at 2:11 AM
:coffee: QUESTION :coffee:
5. Do you believe Poco will continue to avoid a relationship with Sun, or will she eventually confess? Do you think Sun will reciprocate? How might the event affect their relationship, whether for good or ill?
RebelVampireLast Tuesday at 6:46 AM
1) my favorite scene is probably all the stuff that happened once poco got back to HQ. it was nice getting to see the little community poco has built, figure out everyone’s place in it, and meet a bunch of new characters. just in terms of exposition, it really helped ground me and finally feel like there were stakes and bad things that could happen.
2) Poco. I just like how she’s balanced. She can be fun and goofy but can also be immensely caring to those around her. as recent events show, tho, she isnt perfect. She rash and more than willing to chase after revenge and be the monster everyone thinks she is. I just think she’s got a good dynamic and i enjoy seeing her adventures.
3) I think Nigel is kind of doomed for the evil. Not by choice, but I mean…it’s a lich dagger. There’s nothing more evil than a lich. And I just feel regardless of what Nigel wants, the odds are stacked against him. I think the more evil he becomes, the more Poco’s gonna have an internal struggle about trust and whether it’s worth it. Which I think in turn will play into the struggles about whether she should be better than the monster she’s assumed to be or be the monster she should be anyway.
4) I think Sun won’t be compelled by duty, but I do think some pursuers are gonna come eventually. Lack of heirs is how kingdoms collapse, so it’s not something that can be shrugged off. Especially now that she’s used it as leverge I kind of think she’s asking for it. Cause ya kind of don’t get to abandon your kingdom but then use the fact youre a princess without consequences.
5) Poco is definitely gonna confess, because those are the sorts of feelings that just come bursting out after the bottle gets too full. I think Sun will reciprocate eventually, but probably not at first. I think at first Sun is gonna be surprised and confused.
RebelVampireLast Wednesday at 1:02 AM
:coffee: QUESTION :coffee:
6. How might Nigel’s backstory as a betrayed prince affect future events? Do you believe Poco will understand and accept him keeping it secret? Also, what is Nigel’s hand up to during all the story’s events?
DelphinaLast Wednesday at 10:54 AM
Just caught up on the archive and gaaahhhh another comic with a sapphic lady knight! My one weakness!
For some reason, the scene where Poco gets to the top of the mountain only to find out there were stairs all along made me giggle a lot. Of course Poco chose the hard way. Of course!
Sun is cute (aforementioned lady knight weakness) and I’m intrigued by her past and how it’s going to catch up to her, but Poco is probably my favorite so far because she’s been given more nuance at this point in the story. She’s feisty and competent, and that’s always fun.
I gotta agree that Nigel’s chances don’t look great. He’s already lost a bit of control and I suspect reuniting with that rogue hand is going to make him lose it entirely. This comic hasn’t been shy about murder, so I suspect after some deliberation, Poco’s gonna pull the knife on him. Maybe if we’re lucky he can be necromance-d back without too much fuss.
RebelVampireLast Thursday at 1:19 AM
:coffee: QUESTION :coffee:
7. Why do you think Ryker killed Poco’s parents and the other goblins? Was it just non-human racism, or was there another reason? Do you believe Poco will actually manage to kill him this time, or are they destined to face off again?
DelphinaLast Thursday at 9:22 AM
Yeaaaah, I might be wrong about this, but Ryker doesn’t seem That Deep. I’m assuming he’s just a racist violent dude and he murders a lot of people because he thinks humans are superior, and Poco’s family were some of the few that effectively fought back and scarred him/stopped him for a while. I don’t think she’ll kill him yet. They’ll meet again.
RebelVampireLast Friday at 1:19 AM
(the archive for the chat on Helsirvente is now up! @khkddn https://comicteaparty.com/post/182467247440/january-21st-january-27th-2019-ctp-archive)
:coffee: QUESTION :coffee:
8. Given the massive human slaughter, what backlash might the Outrunner Outpost face for their actions? In general, how do you think Poco and company might affect humans’ views on non-humans?
@Delphina I have been ultra worried about that rogue hand. I can’t decide whether I should find it more light hearted or more ominous of things to come. Cause he seemed fine when he had it but maybe he won’t be fine because of the severing. Not to mention Nigel will probably have to realter his outfit or something.
6) I really do hope Nigel’s background comes into play. I’m really curious about this random fact he’s a prince and it seemed a significant point to bring up. And I mean…if he does get taken over by a lich very easy to show up to the old kingdom and go “i am the rightful heir” or something. I think that’s a secret Poco would understand that, since its not like she doesnt already keep royalty in the pocket.

7) I’m a bit torn. I kind of think it’s a mix of both. Like one goblin did something bad, but then Ryker was a racist and said he couldnt tell them apart and just genocided them. I don’t think she’s gonna get to kill him anytime soon. Ryker is super not done being the ultra dick of this story.

8) I think there’s gonna be bounties on them for sure. I don’t think the humans are gonna take kindly. Although I think the one dude Sun save might try to say something but then meh out. For the time being, I think Poco and them aren’t really gonna change anything about people’s viewpoints. Partly cause Poco herself is kind of ready to be the villain they want her to be. Her bro is really the one who has the chance of changing viewpoints, and right now hes in no condition to be all heroic.
DelphinaLast Friday at 10:45 AM
Yeah, Poco’s core tactic seems to be “gather up all the non-human folks into our own little commune”. I’m curious if they’ll take the healer in, because he’s the only human that’s expressed a desire to not murder anyone, but I suspect if that happens, it’s just going to be a matter of “well, you’re one of us and you’ll have no contact with humans from here on out”. While Ryker might send MORE people after them, I don’t expect the plot to move beyond skirmishes.
I guess there’s also the possibility if Nigel somehow assumes a position of authority over the humans as his birthright and Sun goes back to her position of authority over non-humans as her birthright, they could politics their way out of hostilities, but it’s a long shot and would definitely take a tone shift over what we’re seeing at this point in the story.
RebelVampireLast Saturday at 2:14 AM
:coffee: QUESTION :coffee:
9. Overall, what other adventures and mishaps do you think Poco might get up to in the story? Also, what role might the pacifist Miller have to play in future stories?
RebelVampireYesterday at 1:00 AM
:coffee: QUESTION :coffee:
10. What are you most looking forward to in the comic? Also, do you have any final thoughts to share overall?
RebelVampireYesterday at 7:45 AM
9) im definitely thinking were gonna see some more dungeon diving. cause cant have adventure without dungeons. as for Miller, I do actually think he’s gonna wind up with them eventually. maybe not right away, but I think he’s gonna express some opinions that the big cheeses arent gonna be fond off and hes gonna be exiled or something like that.
10) im looking forward to seeing nigel’s hand arrive cause that could go really badly or be really benign. and until then the tension is building as to how that will all play out.
DelphinaYesterday at 6:06 PM
Yeah, I also want to see what happens with Nigel’s hand and see a little more around his and Sun’s backstories and worldviews.