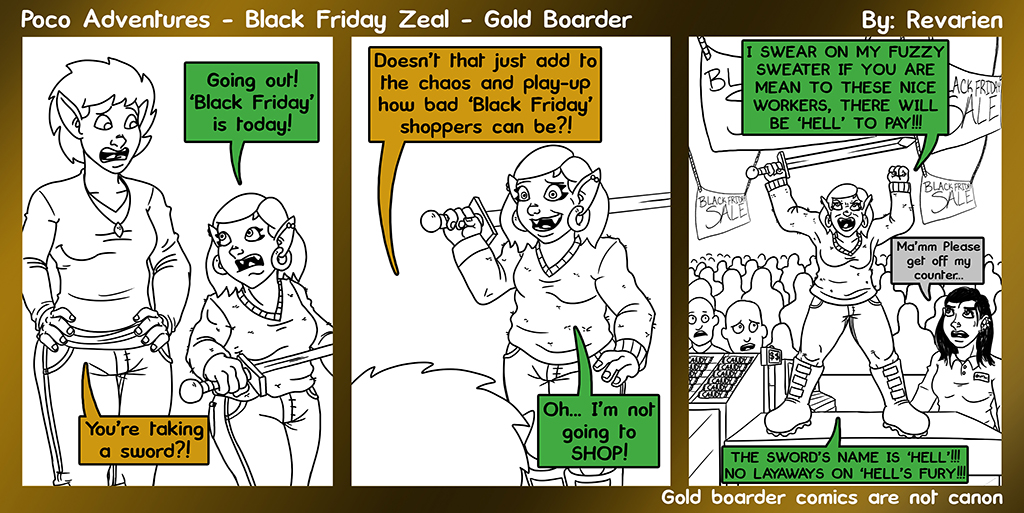 A gold-border one today about black friday :3
I know it’s not a canon comic, but I had a few things to say about this:

I’ve worked Black Friday a few times in different aspects, back in the day: in retail AND in the food industry.
Neither is ‘normal’ as an employee.
Personally I’ve had money thrown at me (for the store running out of the bagel they wanted and demanding something else… at least my manager at the time stood up for me), and seen a bunch of merchandise thrown on the floor because we ran out of specific item they wanted more. Along with other various pushing, shoving, yelling, etc.

I suppose it MAY have gotten better since I worked in those industries… because stores are opening at different times – but they’re now opening ON Thanksgiving. I get some folks are looking for stuff to do after they spend time with families, etc… if they get to at all.

I don’t have a problem with workers choosing to work Thanksgiving, but for a lot of people it’s not a choice, nor do they get any extra compensation for doing so.

Also, I don’t have a problem with folks going out for deals on on Thanksgiving (that playstation 4 for 200$ with spider-man! whoa!), but I’m 100% an advocate that the employees be treated with dignity…

Sounds good. Unfortunately (or perhaps fortunately), even when I attend Black Friday (like this year), I don’t see anything approaching that level of unrulyness.

More generally, I may not say much about the comic often, but it is looking nice so far. I do read every update the day they are released as well.

As to topwebcomics, I agree that is an excellent rendering of Poco though not quite “mount it on the wall to look at” quality.

Side note: Shouldn’t it be “gold border”, not “gold-boarder”?
https://www.dictionary.com/browse/border

Yeah, I was in retail and food a while back – maybe they were headier days and more harrowing back then.
Looks at ‘border’ and ‘boarder’